This module allows players to, with mixed success, transfer the enchantments on tools, weapons and armor onto enchanted books for reuse.

No book is required for extraction; the Extractor creates the book if it successfully extracts an enchantment. Powerful Enchantments (Mending, Sharpness V, Power V, Silk Touch, Efficiency V, Looting III) have a 3% chance to be cursed with Curse of Vanishing when extracted. 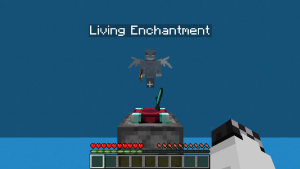 To create an Enchantment Extractor, place down a dropper and insert the following recipe inside, then throw an enchanting table on top.

Below is a list of all Enchantments and their success rate of being extracted.

*Has a 3% chance of having Curse of Vanishing when extracted

The MC 1.8 Version did not have achievements. Additionally, there was no chance that a vex would spawn in this version; if the extraction fails, nothing happens. In this version, there is also no chance for powerful enchantments to be cursed. If the table is broken, only the enchanting table and dropper would be dropped.