The Sky Dimension is a module that adds a dimension above the Overworld with terrain generation custom to the dimension.

The Sky Dimension has completely custom biomes. Each floating island is a separate biome, separated by void biomes. In all non-void biomes Creepers, Endermen, Skeletons, Spiders, and Zombies can spawn. 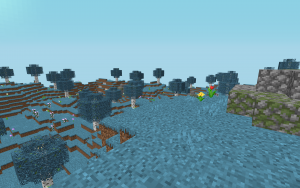 The Anakiwa Gardens contains blue-green foliage and flowery landscapes containing birch balloon trees and boulders. Peonies, pink tulips, red tulips, lilies of the valley, alliums, and blue orchids can be found in this biome. In this biome, sheep and chickens can spawn. 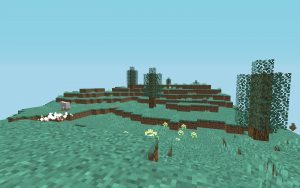 The Aquamarine biomes contain aqua foliage; the Aquamarine Hills contain rolling hills with scarce slim oak trees, surrounding the occasional Aquamarine Forest, which has an abundance of slim oak trees. Pumpkin patches can generate in the hills, while ferns and sweet berry bushes can generate in the forests. Azure bluets can be found both aquamarine biomes. In these biomes, sheep and chickens can spawn, but in the forests, foxes can spawn as well. 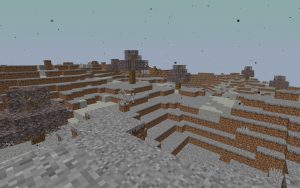 The Calcic Corrasion and Dunes are a wasteland covered in dust and littered with fossils. Patches of light gray concrete powder and dusty oak trees can be found throughout the corrasion. Very occasional pumpkin patches can generate in the dunes. In these biomes, skeleton horses and silverfish can spawn along with the normal monsters. 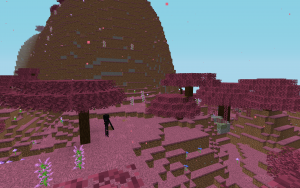 The Carnation biomes contain pink, flowery landscapes with tall plateaus containing dark umbrella trees and boulders. Lilacs, pink tulips, alliums, and cornflowers can be found in these biomes. Additionally, lakes with sugar cane can generate in these carnation biomes. In these biomes, sheep and chickens can spawn. 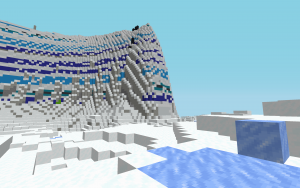 The frosted biomes are covered with snow and ice. Icy pools and snow layers can be found around the Frosted Floe, while piles of colored concrete powder can be found on the tops of the Frosted Stratum. The Frosted Stratum has layers of blue, cyan, light gray, gray, white, and light blue concrete. Both biomes have ore patches of red, orange, yellow, green, and lime concrete. In this biome, 80% of skeleton spawn attempts are replaced with stray spawn attempts. 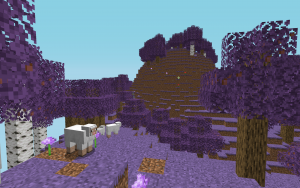 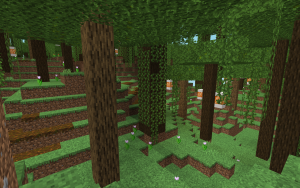 The Sulu Thicket contains lush green foliage and tall umbrella oak trees and huge dark oak trees covered in vines. Floating shroomlight lanterns are found throughout this biome. Pink tulips, red tulips, and white tulips can be found in this biome. Additionally, patches of coarse dirt and podzol can generate in this biome, along with lakes. In this biome, sheep and chickens can spawn. 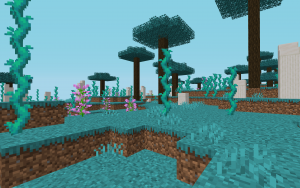 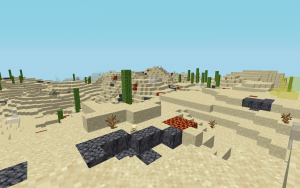 The Vitreous Sands are a desert, with sandstone completely replacing the stone all other islands have. Tall Cacti and dead bushes are common in the Vitreous Sand. Patches of magma blocks and basalt can also be found in this biome, along with sharp rocks made of white, orange, yellow, light gray, and gray stained glass. In this biome, blazes can spawn along with the normal monsters, and 80% of zombie spawn attempts are replaced with husk spawn attempts. 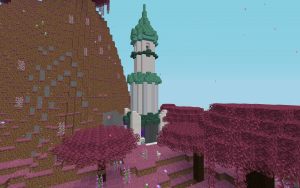 Sky Tower in the Carnation Grove 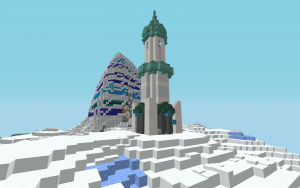 Sky Tower in the Frosted Floe

Sky Towers can generate with various number of configurations. Every tower has 3 sections, a bottom, middle, and top. There are loot chests in each section, with increasingly valuable loot as one climbs up the tower. At the bottom section, there is a single monster spawner and a few chests. Additionally, the outside of the tower has shulkers[1] surrounding the bottom of the tower. At the middle section, there are one or two monster spawners and a few chests. At the top section of a tower, there are the best loot chests, but also skeleton guards with punch bows and poison arrows. 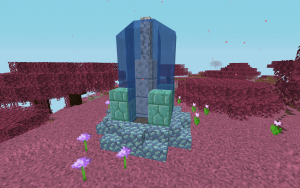 Sky Fountain in the Carnation Grove

Sky Fountains can generate with a various sizes. Most fountains have a loot chest with a random assortment of items.

Beeloons grant the player Slow Falling and Levitation by leashing bees. This can be used to reach the top of the overworld to enter the Sky Dimension. Leashing 5 or more bees will give the player levitation. Holding a flower will cause the bees to fly downwards, giving the player slow falling.

The Colossal Phantom is the boss mob of the Sky Dimension. It can be summoned in the Sky Dimension using Phantom Bait and drops the Sky Lens when killed. The Sky Lens allows beacon beams to acts as a levitation ray, allowing players and mobs to easily gain levitation. Summoning the Colossal Phantom requires at least 10 Phantom Bait. There are 5 phases of the boss battle of increasing difficulty.

Stardust from falling stars is used as a currency for the Sky Dimension. Sky Wandering Traders will trade the player Stardust for rare and otherwise unobtainable items such as Enchanted Golden Apples, Coral, Pigstep, Unbreaking V Gold Armor, Looting III Axes, etc. Additionally, the crafting recipes of ender eyes and netherite ingots have been moved to trading with Gilded Magesmiths. Ender eyes and Netherite ingots will require Stardust as an intermediate ingredient.