This module is packaged with the Sky Dimension module.

Gilded Zombies are zombie villagers that wear elytra. They are invulnerable unless hit with any gold item[1]. Once cured, they turn into Gilded Magesmith. When killed, a Gilded Zombie will drop 0-13 stardust[2] and 0-2 rotten flesh.

Gilded Magesmiths will despawn after a specific duration, similar to normal wandering traders. The Gilded Magesmith's trades are always the same. Below are their trades.

Every 40 seconds, a falling star shower has a chance[3] of appearing above players. These falling stars carry a Splash Potion of Levitation and 1 of 4 items:

Stardust is used as a trading item between Sky Wandering Traders and Gilded Magesmiths, two mobs added by this module. 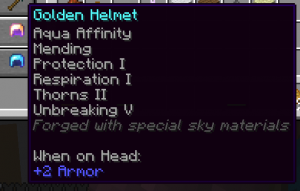 Golden Helmet with Unbreaking V from a Sky Wandering Trader 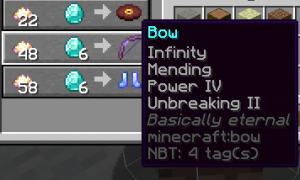 Bow with both Infinity and Mending from a Sky Wandering Trader

Wandering Traders found in the Sky Dimension have custom trades, usually including custom tools armor with lore and otherwise unobtainable enchants, such as golden armor with Unbreaking V or bows with both Infinity and Mending. Metallurgy Shamirs are also traded.

The first 3 trade slots sell rarer blocks or items and cost smaller amounts of stardust. The last 3 trade slots contain the custom armor and tools mentioned above. These custom tools and armor costs both stardust and diamonds to buy.

The exact price ranges of any items are unconfirmed, please update as more numbers are found.

The exact price ranges of any items are unconfirmed, please update as more numbers are found.