This modules adds a scarecrow which shoots down Phantoms using a firework-like projectile.

A Phantom Scarecrow can be created by placing a skeleton, wither skeleton, or zombie skull on an armour stand and a chest plate with a curse enchantment (Vanishing or Binding). 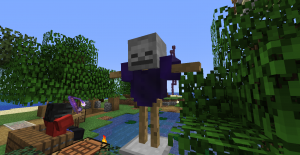 When the Phantom Scarecrow is created, all slots are locked to prevent interaction.

The projectile moves at 16 blocks per second.

Below is a list of blocks that projectiles can move through without exploding.