Runes are a feature on Public Server V which appear in various locations across the world.

Runes are found in various structures around the server, including spawn town portals. They correspond to letters in the Latin (English) alphabet, and are used to form words for players to convert. They are mostly in the form of custom textured skulls on entities which are placed inside of blocks. 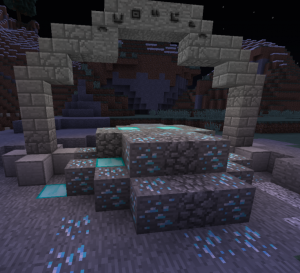 Runic structure with the word "diamond".

Currently, the corresponding runes for all letters apart from j, k, q, x, and y are known. The letters have been figured out using words spelt with the runes on structures, which could be figured out using hints around them, such as blocks or effects. There are assumed to be 26 runes corresponding to letters, but also a rune which appears multiple times on the portals and does not form a word with others. The meaning of this rune is not known. Below is an image of the current 21 known runes, with cropped screenshots of their in-game appearance and a rough sketch of them using black on a white background.

Runes were first seen in the trailer, with the rune for a V in "Public Server V". They were also seen in a teaser screenshot of the portals posted by Bluefire610 on the 26th October, about two weeks before the opening. Once the server opened, a lot more runes were found. On the server, there are structures with runes and certain blocks or effects with them which link to the transliteration of the runes. Some of the first of these structures to be found and shared in Discord are of "blue" by Compsogbrickus, "diamond" by Potato, and "freeze" by Nariek. These new discoveries allowed for a conversion table of the alphabets.

The runes also appear on the portals when they have been activated with a Heart of the Town. 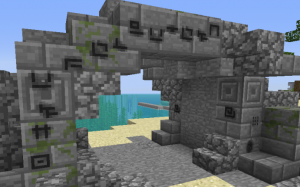 The first activated portal, in the Warm Beach spawn town.

Across the next day, it was discovered that the three different sets of four runes on the backs of the portals were the type of coral around each town's reef, and that each portal had its own corresponding name written in the runes – apricusliture, gelidapurtus, and herbiduspratum. Using the information from these, there is an image compiling all of the structures and runic text along with an alphabet for conversion.