The Mandala and dimension travel in Gamemode 4D is made possible by a plugin created by MatrixTunnel with the help of SpiderRobotMan.

When first joining the Gamemode 4D server, players will have a book titled "Dearest Audrey." In this book, the author explains to Audrey that he has discovered a "a new method of traveling that will take us far from home." The last page of the book is a mysterious note with the crafting recipe of the Mandala.

The Mandala is crafted in a normal crafting table with 6 pieces of flint and any dye in the center.

The Mandala is used to travel across dimensions in Gamemode 4D. To use it, there are specific places that allow teleportation to specific dimensions. These teleport locations are called links. When players are at a Link Location, colored smoke particles will appear. A yellow message will appear in the action bar: "Right click to teleport". Sometimes there is more than one link available at a location. In that case, the player must click the particle with the correct corresponding color to teleport to the desired dimension.

Discovering links can be done usually by going to extreme Y values. Once a player has discovered a link, the travel conditions change to be less extreme. e.g. when unlocking the link to Upper Caves, a player has to go to the very bottom of the Overworld at Y=40, but after that, they only need to go below Y=50. There were exeptions to this with the branching off dimensions like lush, Dark Forest and paths.

When using the mandala at the required y value teleported the player to the chosen dimension right clicked at with the it. Where you would appear in the dimension was determined first by your x and z coordinates where it would try to place you as correctly as possible, and secondly by the y value of the link, for example from Upper caves at y 101 to Overworld had the y value 63, it was uknown if this y value differed if you would use the mandala at a higher or lower y value. It would then try to teleport you there but if it was blocked it would then search in an 11x11x11 cube for the closest free spot, which is a three block high gap. If that would also be blocked it searched in the entire y value of the one coordinate.

A blocked space is either occupied with any blocks, not vines, string or a few other exeptions, or it is a liquid floor. A mandala would never teleport the player in to water. But if all space was blocked it would teleport the player to the original coordinate and remove 2 blocks which it gave to you in the form of non silk touched items, for example stone would get you cobblestone. If the space was blocked by having a water floor it would instead place a dirt block above the water and teleport you onto it. In the rare odccurance of the entire teleportation area would be drained in water it would teleport you to a dirt block underwater.

These mechanics made it possible for so called Quickporters to exist, the definition of a quick porter is a location from where you teleport where the teleportation area is manipulated to place the player on a chosen spot. This was often used from getting from the top of one dimension to the top of another one or the bottom of one to the bottom of another.

There were many Quickporters on the server, the first one being the one going up to the end from the nether, it only went up and had no rules of a quickporter to follow, hence it was pretty messy compared to others. Then there was the Mandala town one, this one went up and down in two small capsules and was the first one made with knowledge of the mechanics, there were a few improved versions without the capsule with open space around instead.

These Quickporters were not only useful for dimensional travelling but could be useful for quickly travelling between y values in one dimension, this was so extensively used to be used in an elevator in Mandala town with 15 selectable floors using the mechanic of 3 block high teleportation area and pistons.

The player will not be placed on top of blocks which can potentially damage them. The list of blacklisted blocks include:

Below is a list of dimensions in the Gamemode 4D server. 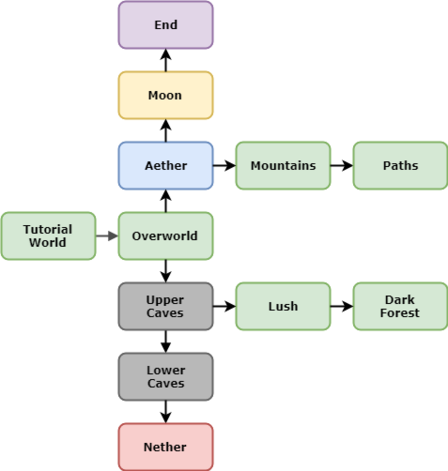