Difference between revisions of "Gamemode 4D"

Gamemode 4D (AKA PSIV) was a public server owned by Accidental Games. It was designed to give fans of Gamemode 4 an open server to play and experience a taste of what there is to offer (all modules used on server will be listed below). The server was officially opened on November 10, 2017 and closed on October 29, 2018.

This server was the fourth iteration, but it was the first official GM4 server to be fully public, as all previous servers had a whitelist with an application form.

Gamemode 4D featured many different dimensions that each served a different purpose. When first spawning in Gamemode 4D, players would spawn randomly in Landings. They would have a book in their inventory that explains how to craft a Mandala. The Mandala would allow players to travel to different dimensions.

There were several dimensions you could reach in Gamemode 4D. To teleport to different dimensions you would need to use a Mandala at specific places. Below are the dimensions. For a full list of Dimensions and links, visit the Mandala page. 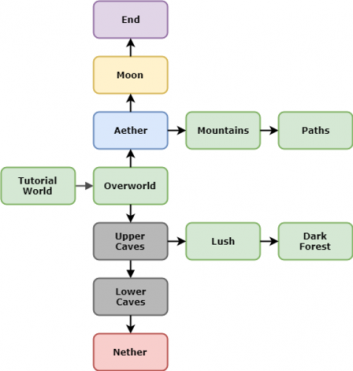 Some dimensions were available for a limited time for a server event.

In this version of the overworld, there were many different characteristic than the vanilla Overworld. The bedrock layer was raised, less ore types could be found, and villagers were void from this world. Additionally, the 2 other vanilla dimensions (Nether and End) could not be accessed through this overworld. >Read More<

Items with the Conduction shamir will not work in this dimension.